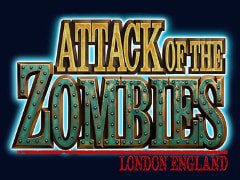 Just as its title says, Attack of the Zombies is a slot inspired by dead persons who wreak havoc in old London eating brains and stealing treasures from their victims.

The game features four bold Victorian girls who are Zombie Hunters and fight back the Zombie plague. All the symbols are theme related and look great while the animations are cartoon-like.

During big wins Zombies explode across the screen which adds even more excitement to the gameplay along with a spooky soundtrack and sound effects.

When the Zombie Hunters get infected and turn into Zombies themselves, look out for the Antidote symbol to cure them and they will help you win big.

The gaming company behind the slot is Genesis Gaming established in 2008. The software developer is one of the key suppliers of slot machines boasting more than 150 slot titles in its portfolio.

Over just a few years, Genesis Gaming has built its reputation by graphically advanced games and innovative bonus features which will enhance your winning chances. Besides regular free spins features, you can benefit from MultiWay Xtra technology which will help you achieve more winning spins, additional Wilds and more.

The game uses 5 reels and 50 adjustable paying lines. You can wager from $0.01 up to $10 per active line meaning that your total bet can vary between $0.50 and $500 per spin at all lines activated.

Push the blue spin button to start your adventure or activate up to 50 automatic spins if you would rather sit back and relax while reels are spinning. When you enter the autoplay option, you will be offered to set your bet as well as the loss and win limits.

Thanks to its elaborate and kind of funny visuals the game will provide you with a frightfully good time. Besides four Zombie Hunters who stand for high value symbols, your reels will be populated with six Zombies and some of them wear crowns.

To win a prize, you need to align three or more of a kind in succession on an active paying line. Each your win will be followed by electrifying effects you will surely enjoy.

Zombies love to eat brains of their victims and in the Attack of Zombies slot Wild is depicted as the brain. It will complete all your winning combinations by substituting for all regular symbols. Another special symbol is Bonus Scatter which triggers the Antidote Free Spins feature. Bonus pays at any position.

During the feature, the Zombie Hunters are turned into Zombies too and your assignment is to find the Antidote symbols to cure them.

The top prize is delivered for landing five Wilds on an active paying line and it stands at 750 coins. Among the regular symbols, the top paying one is the red-haired Zombie Hunter awarding 500 coins for five of a kind.

During the free spins feature you can create multiple winning combinations thanks to one regular and four extra Wilds added to your reels.

The Attack of Zombies slot is a perfect fit for all horror fans and it looks incredible with its elaborate graphics and cartoon-like animations. Four Zombie Hunters will help you fight back nasty Zombies and win some big prizes during both the base and the bonus game.

Look out for the Bonus symbol to trigger the Antidote Free Spins feature and make use of additional Wilds to create lucrative winning combinations. With 50 paying lines and the minimum bet of only $0.50, this game is affordable to all kinds of players while the top bet of $500 per spin will please even those who are willing to risk more.