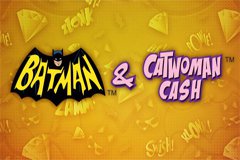 Vicious and hot Catwoman comes to mess with Gotham’s favourite super hero in the new 5 reel 25 payline progressive video slot. With the help of his faithful assistant, Batman will give his best to beat the deceitful masked villain.

As far as the players are concerned Catwoman will be a sight for sore eyes both visually and financially. She will help out with Cat Burglar Bonus and Multipliers and selflessly share her diamonds and trinkets with them.

The imagery and the soundtrack are vibrant and colourful giving away a comic-book feel to the game. This might come unexpected if your only association of Batman is gloomy faces of Michael Keaton, Christian Bale and the like. Still, the reason is that this particular spinner is based on a TV Series and not on popular films.

Nevertheless we promise that you won’t mind once you learn that you stand to win over $1,000,000 via four DC Super Heroes progressive jackpots.

Award-winning online gaming software developer Playtech are considered to be one of the leading companies when it comes to providing solutions for online casinos, bingo, live dealer casinos and more. They provide premium quality content through Playtech ONE omni-channel platform thanks to their cross-platform management system.

Their licensees and partners include some of the biggest names in the gaming industry and recently they have signed a deal with Warner Bros. to create six DC Comic-based slots. First two have already been released: Batman and The Joker Jewels and Batman and Catwoman Cash.

Once you start Batman and Catwoman Cash you will see all the main characters (Batman, Robin and Catwoman) stacked across reels with their weapons and wheels spinning around on a 5×3 reel grid.

In the final showdown Catwoman will have the help of two Siamese cats, her whip and she has prepared a boat and a helicopter to flee once she gets her hands on the diamonds. Batman will rely on his belt and twin blade.

Scatter or Bonus symbol is the only one that cannot be replaced by the Wild and it appears only on reels 1, 3 and 5. It has the power to activate the Free Spins round though you will have to wait a long time until this happens.

Being that we are talking about a progressive video slot, the peak of the game will definitely be once you get the opportunity to win one of four progressive jackpots. Be prepared because it can happen any time during the play.

Should you be so lucky as to trigger the jackpot window, you will have to pick from 20 fields that are hiding different colours. In order to win one of the jackpots you need to match the colours: two green tiles for Mini, three blue ones for Minor, four yellow ones for Major, and five red tiles for Grand Jackpot of over $1,000,000.

If you fail to find the match of colours within given time, the jackpot will be selected for you. The good thing about this progressive slot is that while you are waiting for that elusive top prize, there will be plenty of action to get you through the game.

For example, Batman vs Catwoman Free Games which are activated by three Bonus signs on their dedicated reels. Batman will grant you up to 25 Free Spins, while Catwoman adds one symbol of your choice super stacked during the free play.

The good news is that two Bonus symbols will trigger Cat Burglar Bonus where you get to pick one of them and win either a +1 multiplier which is added to your multiplier balance and applied to Free Games, or you win a cash prize. That is not all.

Catwoman replaces the Bonus symbols with diamonds which bring a cash prize of 2 or 3 times your stake whenever they appear. Another handy addition comes after the Free Spins when Catwoman adds extra Bonus symbols to the reels and increases your chances of triggering another bonus round in the next 24 spins. Catwoman turned out to be not so bad after all.

The betting range for this progressive slot is set pretty wide and goes from $0.25 to $2,500, which makes it accessible to a wide range of players. However those who are willing to bet big are more likely to hit the jackpots.

The most you can get from the base game is 2,500 coins if you land five Wilds, but the masked lady regularly awards you with cash prizes throughout the game.

Batman and Catwoman Cash is an exciting though highly volatile progressive jackpot, so prepare for a waiting game, as the Free Games won’t come that easily either. Still, there will be plenty of treats to keep you interested such as Cat Burglar Bonus or random cash prizes in the shape of diamonds.

If you like the theme but you are not a fan of high variance slots, check out Batman and The Joker Jewels, also by Playtech.