Danish speaking world will most certainly laugh at all of us scratching our heads trying to figure out what this Fodselsdagen title means.

It will become much clearer when you initiate the game as its graphics clearly reveal that this game is about a birthday party.

With that being said, Fodselsdagen actually means Happy Birthday in Danish, which of course is more than a fitting title for the game we have in front of us today.

Fodselsdagen is a game of five reels and 20 paying lines, centered around a festive feeling and a birthday celebration. Play’n Go have created an exciting and a vibrant game which offers plenty of gifts and presents that will make you feel like every day is your birthday.

Play’n Go are a Swedish game development studio which makes plenty of sense that they will go on to promote a Scandinavian expression in the title of their game.

Standing proudly behind the Fodselsdagen slot, Play’n Go love games like these as they are self-proclaimed suckers for amusement and excitement.

Founded in mid 90s by a group of computer geeks who left their jobs at heavyweight corporations, Play’n GO creators pledged to build games that will inspire people to have fun and enjoy their time playing.

Fodselsdagen kicks off with a logo banner and confetti falling from the rooftop all intended to serve as a birthday surprise for the unsuspecting gamers who failed to google their way around the meaning of the title.

As for the symbols in this cheerful title they are everything you would expect from a birthday party. Musical instruments, balloons, all sorts of wrapped up presents and birthday candles. Present are presented in different patterns and colours, while candles are also numerated starting from 1 to 5.

The game also features a Birthday Cake Wild, a Scatter presented as different instruments with a Guitar upfront and a Bonus symbol which is actually a logo made of balloons and two Danish flags.

Fodselsdagen is a regular game when it comes to the gameplay as it pays for a combination of at least three matching symbols in a payline. Play’n Go have inserted a neat detail within the base game as all of your wins will be doubled once you land two Scatters on your reels.

We all know that those symbols trigger bonuses and pay once there are three of them on the reels, so this is quite a nice little touch to make you excited and motivated to keep on rolling. 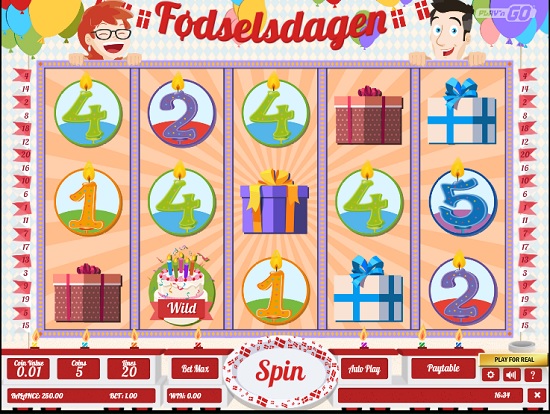 The abovementioned Scatter symbol is responsible for the Free Spins mode, everyone’s favourite. Landing three or more Scatters will get you the minimum of 15 free games while you can hope to go on as many as 25 complementary rides.

A twist again – thank you very much Play’n Go – Scatters are acting like Wilds during the Free Spin bonus mode.

A final twist in the birthday tale is an interactive and utterly dynamic and exciting bonus game. Three Bonus symbols on the reels will take you to a gift room where the parents placed all the friends your friends got you for your birthday.

You will then be prompted to pick three of your own choosing in a great bonus that can award you with a lucrative win.

There are several types of presents available – bells, birthday hats, balloons and a camera that will get you 5x multiplier, but also a tablet which is worth 10x your bet and a wrist watch at 20x the stake. The top prize is worth 100x your stake and it is presented as a cake.

Fodselsdagen’s 20 pay lines are available for up to 5 coins per line with their value ranging from 0.01 to 1 which basically means that the top bet in this birthday party game is $100.

Birthday cake Wild is the game’s top paying symbols which will award you with 5,000 coins if you manage to line up five of those symbols in a line. Bonus round is however offering the top prize in this game as three top gifts that are at your disposal can ideally get you 300x multiplier making the top prize worth whopping $30,000.

Filled with surprises as any real birthday party should be, the Fodselsdagen slot is a genuinely exciting game which will exceed your initial expectations.

Play’n Go have created a game which delivers nothing short of bonus bonanza with Free Spins, Wilds, Multipliers and an interactive Pick a Gift Bonus that can reward you with lucrative winnings if you get lucky enough.

Play’n Go have compounded the overall impression with cartoon-like graphics and colourful visuals that add much depth to the game as well.

As for the audio effects, you get everything you hope to hear at a birthday party. Your friends chatting in the background, cheering for you when you land a win and a guitar cover to build up tension during spins. Overall a truly exciting game.