It’s dark on the streets of London in the video slot based on the novella written by Scottish writer Robert Louise Stevenson. Strange Case Of Dr Jekyll And Mr. Hyde, one of the most popular stories in English literature, inspired the game which is played in two modes.

If you are not familiar with the story, you should know that its protagonist is Dr Jekyll who drinks a magic potion and turns into an evil version of himself.

This is a story about the fight between good and evil which is nicely used in the game with crisp graphics and smooth animations accompanied with a dramatic music theme which contributes to the overall atmosphere.

Founded in 1999, Playtech stands out from the crowd by their branded slot machines among which are the Marvel Series slots based on famous Marvel superheroes.

Their titles feature outstanding graphics and animations and offer highly rewarding special features. Besides this series, Playtech offers a variety of video slots using random themes as well. Some of them deliver progressive jackpots.

Played at five reels, the video slot offers 25 fixed paylines. The bet value ranges between $0.25 and $125 per spin which will please both penny punters and high-rollers. You can activate the turbo mode and spin the reels faster. The game offers the autoplay option with up to 99 automatic spins or you may manually spin the reels. A book, a hat, two female characters and Dr Jekyll deliver high payouts while the rest of positions are populated with low paying symbols depicted as playing cards symbols.

To win a prize you need to match at least two high value or three low value symbols consecutively on a winning line. The game also offers the Feature Bet button which enhances your winning chances at a certain price. When you activate the feature, your wager will be doubled.

As can be expected from the renowned software developer such as Playtech, the overall appearance of the game is superior and engaging providing you with a supreme gaming experience. 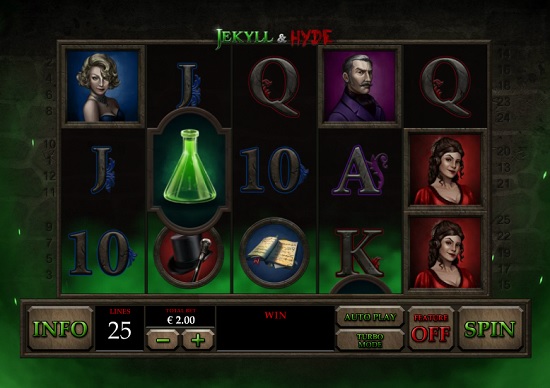 The special features come in two modes which depends on whether you have activated the Feature Bet option or not. The feature which is present during both modes of play are expandable Wilds appearing only on the reels 2, 3 and 4.

If they can complete a winning combination, Wilds will expand and cover the entire reels they appear on. You also get Scatters whichever mode you activate, but if you opt for the side bet your Scatter will be powered up. In the regular mode a bottle with green potion stands for Scatter, while during the enhanced mode Scatter is represented as a bottle with red potion.

Although you can enter free games which ever mode you play at, when Scatters are powered they can trigger the free spins feature when they appear partially on the reels.

Get three Scatters and you will be offered to choose between Jekyll Spins or Hyde Spins coming with different sets of additional features. During Jekyll Spins whenever Scatter appears you are rewarded with up to 5x multipliers while during Hyde Spins Scatter appearing on the reels turn high value symbols into Wilds.

Throughout the free spins feature you can get expandable Wilds and the bonus game is active until you hit 4 Scatters on the last reel. It ends when the bottle with potion breaks.

Dr Jekyll as the top paying symbol delivers 1,000 coins when five of a kind land on a winning line. However, your true ally will be expandable Wilds depicted as Mr Hyde as they may cover three central reels and complete many winning combinations.

As high value symbols show up rarely on the reels, you have to rely on the bonus game awarding additional Wilds or multipliers.

The eerie atmosphere that sends the shivers down your spine is guaranteed with the slot machine from Playtech. All slot enthusiasts who are at the same time horror stories’ fans will surely be delighted with the game as it is affordable at only $0.25 per spin if you decide to play it in the regular mode.

Providing you want higher odds of winning, double your stake and look for the parts of the red magic bottle as they are your keys to the highly rewarding free spins feature.

The story of the split personality of Dr Jekyll served as an inspiration to other software providers too, so you may try the slot based on the same theme developed by BetSoft which boasts 3D graphics and cartoon-like animations.