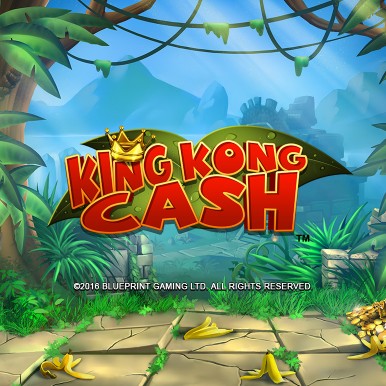 King Kong Cash is a cartoony and slightly humorous account of the most popular ape of all times. King of the apes brings us a 5 reel 20 payline jungle adventure packed with features and random games.

Prepare for a wild ride as there will be board games, multipliers, extra wilds, upgraded symbols and much more.

Just be careful not to wake up the ape, because he gets angry and takes it all out on your reels.

He will blast them with a mallet and shoot to throw barrels but don’t worry. You can only benefit from his anger.

Sound and visual effects create a light-hearted and lively atmosphere which will entertain you along with the comical main character.

The developing company behind this vibrant spinner is Blueprint Gaming, one of the prominent UK developers of slot machines. As a part of German Gauselmann Group they operate in Germany and Italy as well.

Blueprint’s gaming content is available on both online and land-based platforms and it is not rare to see them create branded slots too. This time they prove their worth by bringing a range of innovative and dynamic features to a typical 5×3 video slot.

Set in the midst of wild jungle 5 reels and 3 rows are kept under the not so watchful eye of the King Kong who is sitting asleep in his chair next to the reels. Your job is easy here. All you have to do is set your bet starting from $0.20 and you are good to go.

King Kong’s jungle is a fun and safe place so even if you come across dangerous wild animals such as tiger, rhino or alligator don’t worry as they are pretty cool in Kong’s world.

But let’s take a look at the payouts. The top-paying symbols are game’s logo and the Wild which pay 500 credits for five of a kind.

Wild is depicted as a big barrel that sometimes gets thrown into the reels when the gorilla wakes up and decides to smash everything. Other than that they are just regular Wilds able to replace any symbol except the Scatter.

The rhino and the tiger will pay 300 credits for five of a kind while the parrot and the alligator are worth 200 if you find five of them across the 20 paying lines. The rest of the tiles on the reels will be taken by the low paying playing card symbols.

You should pay special attention to the face of the goofy gorilla on the reels as it will act as a Scatter that triggers the King Kong Bonus round.

If you think that the sleeping Kong next to your reels is there purely for decoration guess again. When he wakes up he can add one of four random bonus games. 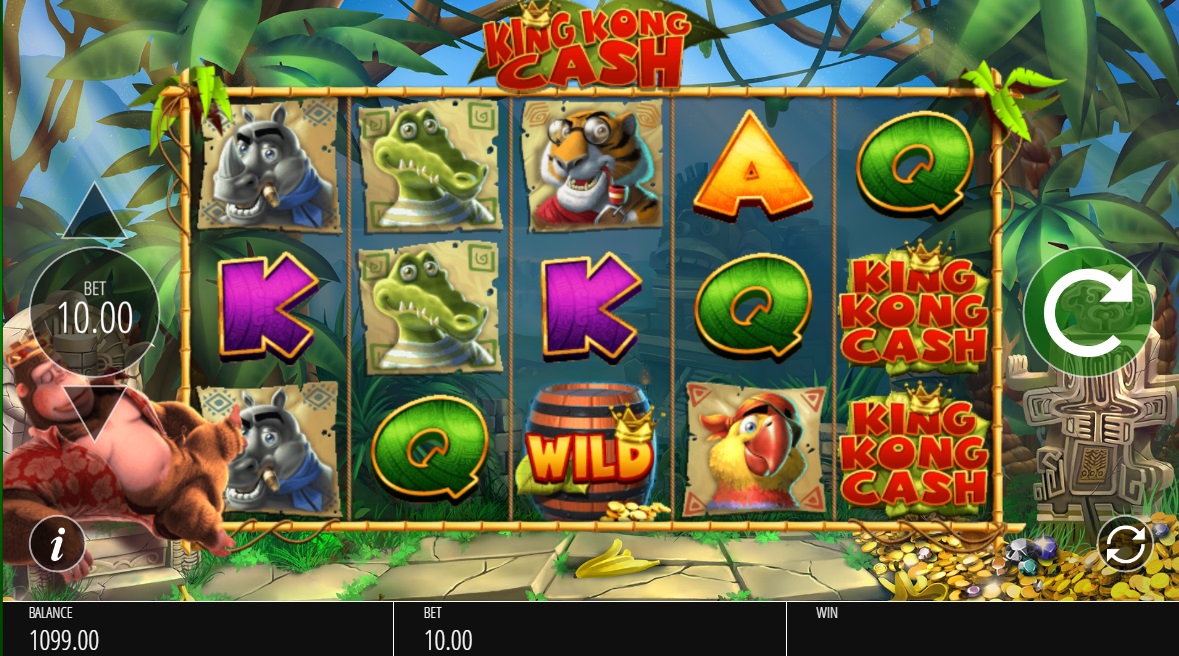 Well, we don’t know where to start, because King Kong Cash comes packed with features both in the King Kong Bonus part and throughout the main game.

We will start with the most interesting part and the reason why everyone will play this game – King Kong Bonus. As you may suppose, the launch of this bonus game is activated by landing three bonus symbols on the reels but what you surely don’t expect is to see five different bonus games.

If the wedge stops at Barrel Blast you will see a screen of 20 barrels which you are supposed to click and they reveal symbols. The goal is to get three of the matching symbols in order to get a multiplier between 4x and 10x. However, you could go straight to the Big Money Bonus if you find three golden monkeys.

King Kong Trail is made of two parts: a trail of multipliers where you pick the barrels to move ahead on the trail and collect multipliers on the way. The barrels also hide Golden Monkeys which take you to the Big Money Bonus and also the Bomb which ends the round.

Empire Free Spins takes you all the way to Kong’s favourite place – Empire State Building where a spinning game on three stages awaits. Each stage is another set of reels and you will start from the bottom most one. During the 10 Free Spins you get, you will have to collect three Golden Monkeys to advance to the next, upgraded set of reels.

Golden Kong Free Spins introduces a 5×4 set of reels with a special feature of collecting wilds. Each Wild that appears on the reels will be collected in the dedicated board on the right side and when your Free Spins are over, you will get another spin with all the Wilds thrown in to increase your chances of winning.

Big Money Bonus is a chance to win hefty multipliers of your total bet through the barrels that spin around the gorilla.

Believe it or not, there are even more features in this game. Sleeping Kong might wake up at any time and award one of his four random bonuses.

Kong sometimes fires banana stacks and sticks them onto the reels when they turn into Banana Cannon Wilds. Also he throws golden barrels that reveal the same symbol when the reels stop. The more barrels, the more matching symbols.

King Kong Spin Streak will occur after a winning spin and it will add the symbols to upgrade your win. Bonus Boost might be your favourite as during this feature gorilla adds more bonus symbols and increases your chances of hitting the main bonus round.

This game comes with a pretty wide betting margin ranging from $0.20 to $500, which will definitely satisfy high rollers.

The opportunity to get multipliers through various rounds translates to a potential of winning 1,000 times your stake per spin.

King Kong Cash is one dynamic and amusing slot which definitely brings most benefit through its various features, though at times it does seem a little too cramped with different games.

However, the good thing is that each of the games holds solid winning potentials so you definitely won’t get bored or empty-handed playing this slot.