Flower-power returns in style with Jimi Hendrix slot, created by NetEnt, a company that has already enjoyed success with similar-themed slots, such as Guns ’n’ Roses. The very game begins with Hendrix’s amazing guitar performance that instantly gets you into Woodstock mood.

The reels are filled with symbols characteristic of that particular era, with Jimi Hendrix himself, his white and red guitars, peace symbols, hearts, flowers, records and even the playing card symbols made with corresponding ornaments. You only need to spin the reels while awaiting one of many special features, and Jimi Hendrix jams just for you.

Those who love rock music as much as we do will enjoy the sound effects, while the visuals are also quite impressive. The variety of Jimi Hendrix songs is included in the slot, but Foxy Lady is the one that dominates.

A good number of wins can be achieved in the base game, rewarding you with a respectable amount of money. Concerning the bonus features, we have six of them, two of them occurring in the base game rather frequently. As for Pick and Click feature, it is the most desirable feature of the slot, since it offers four different types of prizes. Coin Win can get you up to $6,000, which is pretty good. 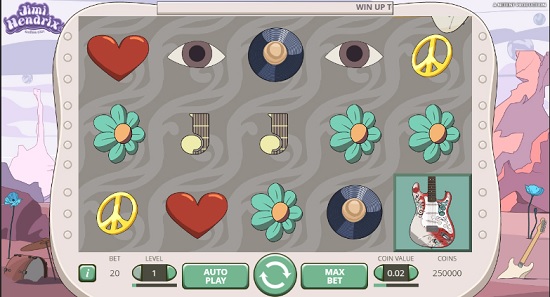 Speaking about the free spins round, even though we have three different kinds of those, Purple Haze Free Spins and Little Wing Free Spins seem quite similar and NetEnt could have done a bit better in this department if the stress was on variety, or they could have simply blended the two into a single free spin feature.

Even though Foxy Lady is an exceptional song, we must admit it can get a little monotonous if you listen to it for a longer period of time, especially if you fail to land any special features for a while. If these appear on frequent basis, the changes of song playing in the background will make things a bit easier.

If you liked Guns ’n’ Roses slot, you will also enjoy Jimi Hendrix, given the fact that the themes are similar. The maximum payout here is $80,000, which is a fairly attractive sum of money. The base game offers a respectable number of wins that will not always be as high as your wager, but can deliver a nice amount of money from time to time.

This video slot is packed with action and special features, so you will have a lot of fun playing it, especially when you get to the Pick and Click feature, but bear in mind it does not strike very often. All things considered, Jimi Hendrix slot game is worth your time.