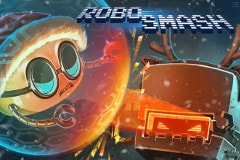 Robo Smash is an SF-themed video slot which takes you to the future which does not seem so bright.

The reels set against dystopian scenery are populated with a group of cute robots but everything around them seem to fall apart, even playing card symbols looking like they are made of wood.

You don’t have to be an Isaac Asimov fan or to know the three laws of robotics to enjoy the slot which will provide you with the Christmas spirit, oddly enough.

If you expect to see lights, Santa or his little helpers, forget about it. A decorated branch is placed above of the reels while little robots wear little caps to protect themselves from the harsh weather conditions in this strange place.

The graphics are nicely rendered and accompanied with a futuristic soundtrack which suits the theme of the game.

The gaming company behind the Robo Smash slot is London-based iSoftbet. From 2010 they are dedicated to the development of video slots including branded slot titles based on TV series and movies such as Beverly Hills 90210, Rambo and Platoon. A number of their slot games feature 3 reels with additional reels enhancing your winning chances.

While playing iSoftbet slots one can benefit from a variety of bonus features including special wilds, respins, multipliers, free spins, bonus wins and more.

Robo Smash features 5 reels and 15 fixed paying lines. All you have to do before you set your reels in motion is to adjust the bet value by choosing from $0.01 to $3 per line meaning that your total stake per spin can range between $0.15 and $45.

Push the spin button or activate up to 1,000 automatic spins if you don’t feel like spinning the reels manually. You are also allowed to set the win and loss limits.

To win a prize you need to land as many identical robot or playing card symbols in a row on a paying line as possible. For the lowest payouts, you need to align only three symbols of a kind, to be precise.

Make friends with your new cute robot friends designed in cartoon style and you will enjoy playing Robo Smash despite its odd appearance. With 3D graphics and smooth animations the game will provide you with a pleasing gaming experience.

Besides five regular robots, the reels are a home to two Special Robots standing for Wilds which can replace other symbols and complete your winning combinations.

The Robo Smash feature awards 5 free spins. During the first free spin Wilds are locked on the reels 1 and 5 while other reels spin. As soon as the second free spin is triggered, the stacked Wilds move to the reels 2 and 4 while the reels 1, 3 and 5 spin. All payouts from this spin will be doubled.

The same applies on the fourth spin, while on the third spin stacked Wilds meet on the third reel to help you complete more winning combinations. The winnings from this round will be trebled. The fifth free spin is played as the first one.

The maximum payout you can win throughout the game is 22,500 coins. The top paying symbol is the green robot with the Christmas stocking on his head. Land five green robots on a paying line and you will win 500 coins. During certain free spins you can win doubled and tripled payouts which can make the Robo Smash feature highly rewarding.

Robo Smash might not be the most rewarding slot machine you will come across on the Internet as it uses only 15 paylines and its top payout stands at only 500 coins. However, due to its creative visuals and innovative bonus features it will provide you with an exciting gaming experience.

Remember that according to the first law of robotics, “a robot may not injure a human being or, through inaction, allow a human being to come to harm”, so adjust your stake to a preferred value and enjoy this strange slot and the story behind it.