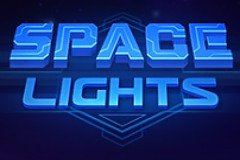 Space Lights is a hypnotic sci-fi adventure that will take you through the depths of space to the floating 5 reel and 15 payline space slot.

The asteroids of different shapes will float before you hiding the magical light, while the rest of the symbols include geometric shapes and two types of Wilds. The floating symbols are set against the deep dark blue universe moving slowly only to remind you that it is expanding with each spin.

Watch out for the portal that will randomly appear above the reels as it is the crucial moment which might take you into the Space Light dimension of big wins. Playson team have done an excellent job combining stunning and crystal clear visuals with mesmerising tunes from outer space that can be played on desktop, mobile and tablet.

Playson are newbies on the market as they have been around for only 4 years, but they seem to be catching the ropes of the business pretty quickly. Their portfolio of over 40 slot titles features HD graphics and exciting features incorporated in captivating and immersive spinners.

The company is based on Malta, but also has offices in Russia and Ukraine. If we are to judge by Space Lights, it seems that a lot can be expected from this developer in the future.

Game play is pretty much simplified prompting you only to pick the size of your bet before you starts spinning. There are also options to choose Maxbet and to choose Autospin mode and you are ready to be launched into the outer space.

The symbols remind of sci-fi flick, featuring asteroids in the shape of cubes, pyramids and hexagons as high paying symbols. All of the asteroids are half opened emanating glowing light to imply that they hold some special powers.

The rest of the imagery includes geometric shapes of circle, triangle and square in 3D form and in 2D form as low-paying symbols.

Still, the symbols that you will be looking for the most are two types of wilds appearing in this game. Regular Wild is presented as letter W inside of a hexagon, while the Sticky Wild has its own outline shape.

There are no bonus symbols or Scatters, which doesn’t mean that there are no Bonus prizes. The game relies on a slightly simplistic view, hence the simplified menu board and the image of symbols floating in space without reel lines.

The special features department revolves around one addition to the game and that is the special portal that opens a new dimension when you score a win. It appears above every reel randomly and it has the power to transform the topmost symbol, provided that it is a part of the winning combination. This is called Space Light mode.

In that case the symbol will be upgraded into a Sticky Wild and award a re-spin. The game does not end here, because the Space Light mode is active as long as the symbol below the transformed Sticky Wild is a part of another winning combination. As you may suppose, it too will become a Sticky Wild.

The aim is to manage to transform all three symbols in one reel into Sticky Wilds because that is when the Bonus Prize will be awarded.

Bonus prize is calculated by multiplying the number of Sticky Wilds, your bet and Bonus Prize multiplier which can be either 2x or 3x.

It is clear, at first sight, that it will not be that easy to get to the Bonus prize. However there is one facilitating circumstance. The Space Light feature functions differently in the last two reels. Actually, the portal is the one that behaves differently.

When it appears it sits somewhere between the fourth and the fifth reel which means that his power applies to both of the reels at the same time.

In practice this is to say that it will be enough to have the topmost symbol as a part of the winning combination in only one of these reels and the second reel will mirror the transformation of the symbols. This will make it a lot easier to trigger the Bonus prize.

The maximum paying symbols are the wilds which will return your stake 20 times, while the hexagonal asteroid will pay 10 times your stake.

Your balance will benefit the most from Sticky Wilds which are counted by the meter and later multiplied by your bet and up to 3x multiplier to get a Bonus Prize. Should you be so lucky to activate the Space Light mode on the fourth and fifth reel you will have two full reels of Sticky Wilds and win big.

Space Light is an immersive futuristic spinner that perfectly combines the minimalistic design with the innovative features that promise simplicity of the game and the possibility of big wins.

The lack of Free Spins is compensated with Sticky Wilds awarding Re-spins while the Bonus Prize concept will definitely attract high-rollers as the bet is one of the multiplying factors in the calculation. All in all, what we have here is a dynamic and exciting game that is definitely worth your attention.