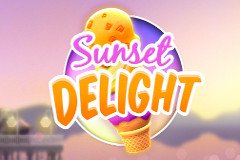 This theme will take you back to your childhood with its creamy theme revolving around delicious ice-creams. Instead of standard reels you will see three ice cream cones waiting to be filled with colourful and tasty scoops.

Sit back and watch those scoops fall from the sky set against the view of what appears to be the sea lit by the setting sun with the Ferris wheel and a circus tent in the background.

You may think that with 3 reels and 5 paylines Sunset Delight doesn’t have anything much to offer, but you should stick around and find out, because there might be more to this spinner.

Thunderkick are new on the scene, but they are making their way in the gaming industry by taking a unique approach. All of their slots feature top-notch 3D graphics which makes them a real pleasure to look at and play.

Another feature typical of Thunderkick is redesigning the basic functionality of the game, so you should not be surprised when you see ice cream cones instead of reels, you can even end up spinning skeleton heads.

Sunset Delight is actually a sequel to Sunny Scoops which features same 3×3 ice-cream towers and even the same soundtrack so if you have taken a shot at it, you will feel at home with Sunset Delight. Still don’t expect same features as this time there are fewer paylines (only 5) and more exciting bonus features.

As in any other Thunderkick slot the control menu is pretty basic. You can adjust the size of your bet and spin yourself or choose to activate Autospin option.

The ice-cream scoops of different flavours are main and the only symbols in this slot, which makes the game quite simple while the crisp and vivid colours and 3D animation make it a real treat to look at.

The highest paying scoop is the chocolate one that has “bar” written on it and it pays 15 credits for three of a kind. The same goes for the colourful Wild scoop, which has W on it. You will want to see the Wild scoop not only because it looks the yummiest and it pays the most but because it can replace any symbol, except for the Scatter.

As for the Scatter symbol, it is represented by a wafer that makes a crispy sound whenever it lands in one of your scoops. Three of those will trigger the Bonus Round.

Though this slot does not offer many special features we don’t think that with 3 reels and 5 paylines it was planned to do that in the first place.

However, known for their creativity in redesigning both basic and special features of the game, Thunderkick did not disappoint and once again added some surprises.

When you land three crispy wafers which work as Scatter symbols, you will activate 5 free spins and the delicious scoops will start piling up, rising all the way to the sky. We thought it was a nice touch that the “free” scoops stayed on top of the regular ones moving the scene upwards.

This traditional Free Bonus round was spiced up with a Multiplier Ladder, which appears at the same time when the Free Spins start. You will see two balloons carrying a big round wafer which holds multipliers up to x100.

As long as you have free spins the balloons will be next to the cones and special wafers with +1 spin/step on them will prolong your free play mode and,  at the same time, take up a piece of the round wafer, that is, award a multiplier to your bet.

When you are all out of free spins, the balloons will pop and the ice-cream will come tumbling down, thus adding up all your winnings. The overall audiovisual experience of this feature is amazing and we couldn’t wait to trigger the Free Spins all over again.

Mouth-watering scoops also tend to leave you wanting a higher payout as the most you can get from three of a kind in the base game is 15 credits.

That is why you will probably rely on the Free Spins and Multiplier Ladder which can pay quite nicely if you reach the x100 multiplier.

It will certainly help if you bet max which is $100, but if you are not willing to risk it, you can lower your bet all the way to $0.10. The theoretical return to player is estimated to be 96,3% which could be higher but it is decent enough.

This is obviously not an ambitious slot, made for the players who like to enjoy the basics of the game with the top-class audio-visual experience.

Well, that is pretty much what Thunderkick are offering here – a slightly volatile slot with added Multiplier Ladder just to shake things up a bit when you doze off to the gentle summer music.