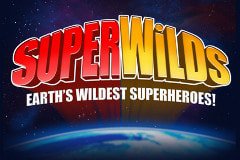 Once you have entered the Super Wilds slot you may ask yourself what’s going on here as its setting seems as a peaceful city.

However, a dramatic music score hints that the city is under attack and to be a good citizen and save it from threats you need to join a group of the Earth’s wildest superheroes.

Assembled to save the world, they will use their special powers to defeat enemies and help you win big. The symbols depicted as villains along with special symbols triggering bonus features are nicely rendered to serve the futuristic theme of the game well and provide you with a thrilling casino action.

The gaming company behind the Super Wilds slot is Genesis Gaming, one of the key suppliers of slot machines to online casinos. With more than 150 titles in their portfolio, the company is dedicated to the production of graphically advanced slot machines which offer innovative solutions when it comes to bonus features.

The Super Wilds slot uses 5 reels and 25 adjustable paying lines. The game features a minimalistic layout with all the controls hidden under the main menu on the left side of the screen. When you enter it, you can adjust the number of active paying lines you will play at, the bet value and activate up to 50 automatic spins.

High value symbols are depicted as villains including the green Mozilla-like monster, the two-headed robot and the evil cube-shaped toaster with sharp teeth. When you complete winning combinations with these symbols they are animated to add even more excitement to the gameplay.

To win a prize you need land at least three symbols of a kind in succession on a paying line. Low value payouts are awarded for creating winning combinations with identical playing card symbols.

They have super powers which translate into additional bonus features during the free spins feature. When triggering the feature, Wilds join forces so that you can create more lucrative winning combinations.

To trigger the feature and get 10 free spins you need to land at least three Wilds anywhere on the reels at the same time. Depending on the special symbols which are included in a triggering combination, you will benefit from additional bonus features throughout the feature.

Double Multiplier Man doubles all your wins when included in a winning combination. Triple Multiplier Man is the most rewarding as he trebles your payouts while Spin Twins award extra five free spins. During free games Expando-Man spreads across the reels in all directions to help you create more winning combos.

Although regular payouts during the base game are not very high, once you enter the free spins feature you can benefit from doubled and tripled payouts and create multiple winning combinations thanks to expanding Wild.

Join the wildest superheroes to defeat villains threatening to conquer the world and enjoy an exciting and rewarding gaming experience with the Super Wilds slot machine. You will be pleasantly surprised with all innovative bonus features the game has to offer.

Try to keep all the lines activated for the best odds of winning and hope for the best. The game is affordable to all kinds of players as its betting range starts from only $0.25 per spin which is perfect for penny punters and goes up to $250 which will impress all high-rollers.