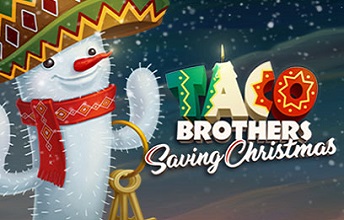 One would not exactly imagine a snowy winter down south to the American border in the good land of Mexico, but Christmas is not the same without the snow and we would all agree that the colourful landscape of Mexico looks much better sprinkled with snowflakes.

All of those who have played the original Taco Brothers game will be quite familiar with the game setting.

Snow, a Santa’s hat here and there and some suitable Christmas decorations upon the symbols are only there to put a festive feel into this Mexican title.

You still have 5 reels of action and whopping 243 winning ways to benefit from. Of course, ELK studios have made sure to fill their game with a couple of rewarding feature that are bound to spice the things up even more.

Taco Brothers and their festive feature have been developed by ELK Studios. This game development company has been established in 2012 but has made huge strides up the gaming universe over the last four years, bringing the casino experience to the next level with their high-definition cinematic graphics and hugely enticing gameplay as well.

ELK Studios pay particular attention to the mobile segment of the gaming industry. They believe mobile devices are great for casino games and built their games specifically designed to be compatible with your phones and tablets. ELK Studios explore limits of this part of the industry and work with all of their capabilities to beat the limitations.

Sunny desert village of Santa Maria becomes a peaceful winter village of Mexico as snow gently falls over the five reels of action.

All of the original elements of the Taco Brothers slot is there as three Taco brothers Paso, Pepe and Pico are ready to get engaged in another taco-saving adventure from evil-eyed Captain Diaz.

The Brothers are the high-paying symbols, whereas you will also see a cactus, guitar, tequila bottles, mining lamps and spades all given a festive, decorative twist. Christmas bell Wild logo is one of the two game’s Wild symbols, while the Safe symbols wrapped with red ribbon is the Scatter.

Like all ELK Studios’ games, this one too comes with three different betting strategies. You can choose from Jumper, Leveller and Booster to set your preferable tone and dynamics for the spins, but the overall aim is the same as ever.

You need to line at least three matching symbols from left to right on any of the 243 winning ways to land a win.
A nice spin to the base game is called Taco Brothers Re-Spins which gets triggered once you land 2 Taco Brothers Wild symbols giving you additional chance to activate the special feature.

Those Safe Scatters wrapped with red ribbon will initiate the Wild Escape Bonus feature once it lands on reels 1, 3 and 5. Once this happens a bomb will explode to reveal one of the three existing multipliers – 1x, 2x and 3x – which will be applied during free spins.

There is another great twist to the Free Spins during which every one of the three brothers acts as a Wild.

The Running Wilds in-game feature will have three brothers Wilds moving from left to right on the reels, replacing all symbols except the Captain Diaz and Senorita who hold keys to either imprison brothers and end the feature or to restart the feature and reward players with another set of free spins, respectively.

Taco Brothers Save Christmas is available from as little as $0.10 and up to $50. Paso is the highest paying symbol worth 400 coins, but that amount is just the beginning as you can all hope to land up to 150,000 coins, which is a pretty whopping amount enough for some hefty prizes.

ELK Studios have once again remained true to their reputation having presented a visually perfect game with quality graphics and a 3D, cinematic appeal. Taco Brothers Save Christmas truly is an original festive game, but not that original when it comes to the content which is mostly same as the original Taco Brothers slot.

It surely doesn’t diminish the appeal to this snow-sprinkled Mexican affair which comes with greatly exciting features and possibly quite substantial rewards going up to 150,000 coins. Needless to say this game can be played on mobile devices since it is first and foremost created to satisfy the needs of mobile users.