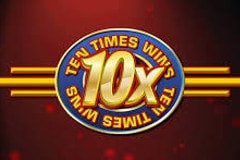 When it comes to video slot themes, it seems that lately all the hype is about going back to the roots.

Developers reach for the traditional 3×3 layout and the graphics tend to imitate the old pokie machine cabinets in order to evoke the feeling of standing in front of the predecessors of all of the complicated and feature-packed slots that we see today.

Ten Times Wins is one of these slots relying only on three types of symbols: 7s, BARs and cherries with the addition of one Wild. Everything is simplified. Even the payouts table is visible on screen next to the reel layout.

However, Ten Times Wins adds one important thing, a 10x multiplier to the Wild which results in the top prize being $25,000 and that makes all the difference. Enjoy the essence of the game and earn some cash along the way.

Rival Gaming are one of the well-known names in the online gaming world. The Cyprus-based company was launched in 2006 with a license in Curacao. Apart from video slots their portfolio includes table games, video poker and other games, but Rival Gaming are best known for their i-Slots.

i-Slots or interactive slots take video slots to another dimension. The players get the chance to take active part through the storyline which is made of different stages, often with addition of mini games. Currently, the company provides its gaming content to over 60 online casinos.

You might think that the game play is straightforward and simplified and you are not wrong, but still there are some parameters that need to be set before you start playing. There is the option to set the number of coins, number of active lines and the coin value. Coin value ranges from $0.01 to $5.

If you wish to go all the way with this 3 reel 3 payline fruity machine, then click Bet Max button. Those who do not like the hassle of constant clicking the spin button can turn on Auto mode at any time.

The top paying winning combinations will have three matching symbols across one of the three horizontal paylines, so it will be pretty easy to keep track of your winnings. The paytable is a part of the game screen and when you hit the winning combination the amount you won will blink on the paytable.

The standard game symbols featured are three kinds of 7s (blue, red and green), three kinds of BARS (one bar, double bar and triple bar icon) and cherries. The combination of three red 7s pays the most, 120 coins, while green and blue pay 90 and 60 respectively.

We could count BARs as mid to low value symbols ranging from 45 to 15 coins for three of a kind. Cherries pay the least. The good news is that any combination of 7s will pay a symbolic amount. The same applies to BARs as well.

Finally, the symbol which the entire game is based on and named by is the Wild which is depicted as 10x, which implies that it will pose as a multiplier to the winning combination, while at the same time it is the highest paying symbol.

Old-school slot machines usually do not have any special features or special symbols or at least that is what we expect when we see fruits and 7s spinning on 3 reels. We could say that the situation is the same with Ten Times Wins with one important, even crucial difference – the addition of Wild symbol.

This Wild symbol works as any other. It has the ability to stand instead of any other game symbol and form a winning combination. However, what makes this Wild special is reflected in its design and name. The Wild actually represents a multiplier which will increase the amount of the winning combination ten times should it be a part of it.

This is a handy feature to have in a simple reel layout, because the paylines are pretty straightforward which means that you will get a chance to see this special symbol appear often and multiply your winnings as you play.

Also, there is important information you should know. Being that it is the highest paying symbol, the combination of three matching wilds and its multiplying function will bring the top prize.

As mentioned above the top prize depends on the Wild symbol and it promises a jackpot of $25,000. That is if you bet maximum amount.

The maximum amount you can bet is $45, while the game is available from $0.09 per spin. This applies to the maximum number of coins and paylines.

Lately there are many video slots based on traditional pull-the-lever machines. Some of them take just the layout as inspiration while some, like Rival Gaming, tend to imitate the original concept. Honestly, we don’t see the appeal of bringing back the old dry-spinning game with a chance of minor cash prizes.

However, one thing that makes Ten Time Wins appealing and competitive is the top prize of $25,000 which can be won thanks to the Multiplying Wild symbol. The game is obviously aimed at the nostalgic players who long for the good old days of 3×3 fruities.