Wild Toro is a 5 reel 178 ways to win funny account of the Spanish tradition of bullfighting. This time we see a cartoon-like 3D video slot that brings the fight straight to the reels.

The Bull will be chasing the Matador across the reel grid, while the giddy Diaz Jr (the Matador) won’t prove to be as courageous as it was expected from him.

The game comes with interesting and atypical features that could bring you a win of 2,250 times your stake per spin.

The audiovisual feel creates an atmosphere or fun and light-heartedness and the good thing is that it is available to be played on any device.

The vibrant 3D imagery is absolutely fantastic so we must say kudos to this young developing firm for managing to create such a superb and innovative slot.

We love the features related to Toro even though he is so angry that he stamps on everything on his way. Two features revolve around the Bull and they both involve him moving from the dedicated 5th reel. Walking Wild is perhaps a more serene feature because it only features Toro who walks around the reels and leaves Wilds.

The best moment of the game is definitely when the Bull starts chasing the Matador. The bull’s mission is to eliminate every single Matador on the reels and he won’t stop until he does that. 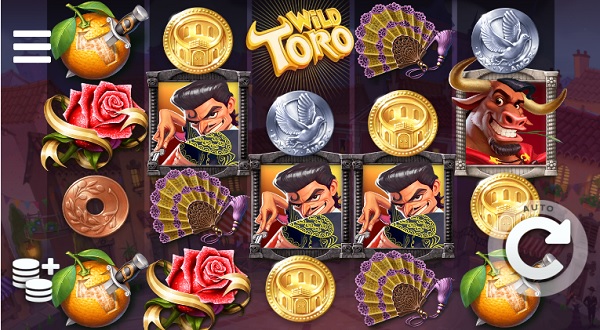 In fact, he is so angry when he sees the Matador, that he turns all symbols in his way into Wilds. If we rely on the wrath of the animal we could see all reels covered in wilds. This is only theory of course, but it could happen.

Matador adds three re-spins when he appears on reels 2, 3 and 4 and sticks around to tease the bull with his red cape. Any new Matador on the reels will also add a re-spin and remain locked on the reels.

This gives the bull something to do, but only if he appears on reel 5. In that case he will shake the reels and start moving until he forces all the Matadors out of the reels. The game promises 2,250 times your stake on every spin. Not a bad promise.

We are not sure what to say about this game. On hand the overall visual impression is more than excellent and the innovative features are great and extremely entertaining. However you might find yourself spinning high and dry, due to the high-variance of the game. Perhaps an additional bonus round would suit here.

The game is definitely fun and dynamic, so you will not regret if you try this one. It will help you win some cash with the Walking Wilds and Toro Wilds.

The top-prize is 225,000 coins, but having in mind the high variance of the game, we don’t see even coming near this number, but you can always hope for the best. Stunning design, witty theme, rewarding features are only some of the reasons why you should give Wild Toro a chance.