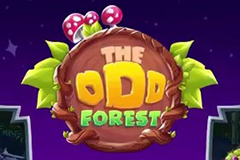 The Odd Forest is a fantasy-themed slot machine which will provide you with an immersive gaming experience as soon as you launch it.

You will be taken into the dark wood standing for the background of the transparent reels.

Boasting supreme 3D graphics and smooth animations accompanied with a mysterious and captivating soundtrack, the game is a home to symbols depicted as strange creatures.

Even playing card symbols look great designed as if made of wood. The story revolves around the Fairy and you are to help her beat the hideous spider for big payouts.

The software developer behind the slot is Foxium, a young gaming company founded in 2015 and based in Tallinn, Estonia. Dedicated to the production of slot games, the company implements numerous innovative solutions in its titles and The Odd Forest is a perfect example of it.

In addition to top-notch visuals, the Foxium games provide players with multiple bonus features thus enhancing their gaming experience and winning chances. Being built in HTML5, the slots from this company are playable across all the platforms.

The Odd Forest slot uses 5 reels and 50 fixed paying lines. You can easily set your stake by choosing a value from $0.50 up to $125 per spin. The game features easy to navigate interface with all the controls at your fingertips.

You can activate up to 100 automatic spins or spin the reels manually. The slot also allows you to turn the sounds off if you don’t feel like listening to its enchanting soundtrack.

Lower payouts are delivered by all the strange creatures while playing card symbols from tens to aces award low value awards. To win a prize you should align at least three symbols of a kind along a paying line in a row. You will be impressed as soon as you launch the game as its graphics and animations are really mesmerising.

Wild appears on all the reels to help you complete more winning combinations by replacing all the symbols except for Scatters. During the base game the Random Wilds feature can be triggered at the beginning of any spin adding from 3 to 6 Wilds to your reels.

Land three Scatters depicted as a tree with eyes anywhere on the reels and you will trigger the Free Games feature. You will be offered four magic orbs to choose from to reveal the number of free spins and a special feature.

When you land three Fairy symbols on the reels you will unlock the Fairy Fight Bonus Game. During the 3-stage game you can win cash awards, multipliers or hearts for the Fairy.

The Odd Forest slot differs from all other games you have played due to its innovative features. Stunning visuals and captivating sounds combined with rewarding bonus features make this game one of a kind. Choose a bet based on your budget and let the game take you away.

You can benefit from free spins coming with a variety of additional special features and win big while enjoying a unique gaming experience.