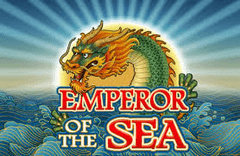 China and its history has been a source of inspiration for slot developers on plenty of occasions. I’ve rarely seen the naval angle being played by developers though, and this is exactly what Emperor of the Sea is offering. Microgaming has created a slot machine that seems to celebrate the naval explorers of China, the ones that traveled on sail ships across the oceans of Asia.

They believed in monsters of the sea, just like European sailors did, and we’re seeing one such creature in a symbol that is used here, taking the shape of a dragon.

The game also features the Chinese sail ships, with their distinctive look, along with symbols that show us riches in different forms. The list of symbols is finished up with a couple of stock quality poker card logos.

If you’re looking at Microgaming, you’re going to see a list of over 500 slot machines that have been created by them for their players. Their games are offered at a huge number of online casinos. Emperor of the Sea is just one of their more recent games, and so you will find in it better graphics than those offered in a lot of other slots of theirs.

They still don’t have the best graphics around though, even in their latest releases, and generally it’s better to try out their slots for their features or their huge potential payouts (sometimes).

The lucky number for the Chinese, 8, is being used in a couple of areas in the game. The betting system is one of them, with the 88 fixed lines that are used inside. You will be allowed to change other parts of the wager though, such as the number of coins or their individual value.

Most games from Microgaming will take on a similar form to this slot machine, at least in terms of interface that is offered. The Paytable is accessed from a Pays button located on the right side of the screen, while the bets and other displays are at the bottom. To access the bet value, you can open up the bet menu or just use the buttons placed to the left and right of the total amount.

Part of the appeal of Emperor of the Sea is the feature list, which starts off with a stacked wild and then gives you free spins and extra features for them.

The stacked wild gives us the image of the logo, with Emperor of the Sea written on it. It turns to a Wild Logo when it gets some action. These symbols are usable just like regular ones, capable of forming combinations alone, but more often than not they will be in the game as substitutes for others.

As for the free games, you get them when the Gold Ingot scatters appear in 3+ positions. You trigger 8 free spins this way, and you get as extras Rolling Reels and Growing Wilds. You get the stacks of wilds to increase in size each round, plus you will see symbols that are in wins roll away, so that new ones can land and bring you additional payouts.

The rewards might not get huge in the individual wins, but since you get stacked wilds there is the potential for a lot of payouts to be offered at the same time. That, plus you have 88 lines, so you always have a good shot at forming multiple combinations.

Emperor of the Sea will be able to deliver some good features and at least adequate graphics for this day and age. The Chinese theme is not impressive, but the maritime angle I did enjoy.