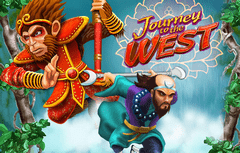 If you’re heading on a journey to the West then it must mean you are starting from the East. It takes not more than common sense to tell us this game is a Chinese theme slot whereas all it takes is a single look to the game’s outline to confirm the initial thought.

Those familiar with Chinese literature will immediately see the connection between the Journey to the West slot game and a famous Chinese story, originally published in 16th century, which went on to take an important place in the country’s folklore.

In it you’ll find characters such as the Monkey God, a Priest, Human-like Pig and a Fighter of sort  lined up against the Enemy symbols, fighting their way through the reels set across a beautiful waterfall. Up to five base-game features come with all sorts of goodies such as full-screen wilds and exciting bonus fight feature which is bound to put you on the edge of the seat.

Journey to the West was created and developed by Genesis Gaming Solutions, Inc. an American hardware and software manufacturer that’s been in the gaming industry since 1999. It was a couple of years later that Genesis Gaming took a bold step into the online world and they haven’t looked back ever since.

Headquartered in Nevada, Genesis Gaming has offices in Vancouver, London and Hong Kong. Genesis Gaming takes full pride in their advanced technology deployed to create top-notch social gaming and mobile gaming content. The company is best known for slot games that are both engaging and rewarding, which is exactly what Journey to the West is like.

Journey to the West is a five-reel and 25-payline slot. Visually stunning, this game is another impressively looking Chinese presentation. Even though this subject is arguably one of the most exploited one in the gaming industry, Genesis Gaming have done it enough to make it look fresh and exciting.

Perhaps it has plenty to do with the fact Journey to the West will pay both ways – for combinations lined up from left to right and from right to left.

In addition to aforementioned symbols of four different Chinese characters which are called Prophet symbols, Journey to the West comes with a Scroll Wild which appears on all reels to replace all symbols other than a Lotus Wild which will be explained in detail below. Scroll Wild is one the highest paying symbol in the game offering 100x your stake for five in a row.

Journey to the West is an action-packed game with five different features, all available in base game. All of them are activated once you land the Lotus Wild, which appears only on reels 3. This wild offers different bonus features in combinations with different Prophet symbols in the middle reel when Prophet-specific features will be triggered.

You can hope to activate the Prophet Enlightenment with Re-Spins, Cannonball Bonus, a Monkey Pick Bonus, and a Wild Attack Bonus.

Lotus and the Skeleton Queen will unlock the battle feature, one of the main features in the game with Monkey King stepping onto the stage to fight the Queen in a fantastic in-game feature. During this feature you will be rewarded with the initial batch of seven picks. You will be tasked to attack the queen to get her Life Meter to drop to 0 in order to defeat her.

It is easier said than done, but once you succeed in the task, you will be in for a big prize.

The Journey to the West comes with the coin range starting at $0.01 up to $2. The maximum bet you can make stands at $50 with 25 fixed lines.

The combination of plenty bonus features and the fact this game pays both ways will see you landing regular wins but not those that are likely to fill up your bags with gold. The total you can hope to get in the 200x your total bet.

Genesis Gaming have done a great job with this slot of theirs. Journey to the West is an engaging game which – with its plethora of special features – resembles a wide game you get to play on your PC.

Those won’t let you win any money, however, but if you’re hoping to land some life-changing payouts on the Journey to the West you better look elsewhere. This slot is fun to play and spend your free time with, but perhaps not what high rollers would have hoped for.