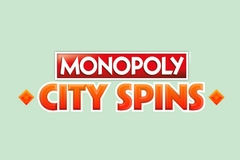 Monopoly: City Spins has been created by Gamesys and it is a slot machine that is inspired by one of the most popular board games of all times. Monopoly has been a source of entertainment for millions of people and to this day it is still incredibly popular.

It’s coming in a lot of different versions right now, but here we get a look at a classic one. You have small reels in the middle, with the city shown in the background and with symbols being mostly with things you’d see in a city like London (black cabs, tour buses, subway trains, buildings, ships, bicycles, etc).

The founding year for Gamesys was back in 2001, and the company has been working out of London ever since. They have over 900 employees worldwide, with a total of 7 offices in other countries. As you can see, this is no small developer, even if you haven’t heard of them yet.

They have a pretty big collection of slots to offer, and among those I would mention a couple of titles that I enjoyed, like Barnyard Bonanza, Houdini or Battleship Wild Targets.

The game has a total of 9 options for you to pick. In each case, you’re looking at 30 lines active and at a line bet that varies between $0.01 and $1.50. The betting range is from $0.30 to $45, which is acceptable and easily accessible for a lot of players.

The interface is not exactly standard. You get the bets in the form of buttons that you click on, and the reels start spinning immediately. The buttons are called Bet or Repeat Bet, plus you get the More Bets action to give you access to the second page of bet options. It’s not a great interface to be honest, especially since people are already used to another way of doing things. This one doesn’t bring anything of value, just makes things difficult. 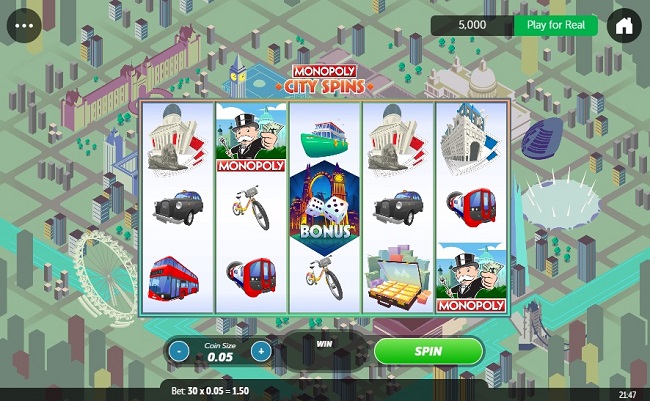 The features from Monopoly City Spins are based on the actual board game. That is why you’re going to see the Board Bonus Round for example, which gives you dice rolls to use inside. The token that you control will move on the Monopoly game area, and with a double you’re getting a second roll of the dice.

Your aim is to collect property cards, which can give you free spins or other features. Other spots on which you can land include Free Parking, Go, Community Chest, Chance or Go to Jail. For that latter option, you might be able to get rid of it with a special card, for Get Out of Jail Free.

The free spins will start out next, and at this point you can take advantage of the property cards that were collected. Each one gives you additional free spins, as well as random multipliers (5x to 15x), random wilds, wild reels or moving wilds.

Mr Monopoly seems to have the best prize in this game, forming a combo that will pay 5,000 coins. That’s a prize that can get in value up to $7,500. The free spins do promise big multipliers, as high as 15x if you collect the right properties during the board game feature, so you could definitely go even higher with the rewards.

Monopoly City Spins is a good example of how a branded game should look like. There are a lot of Monopoly based games out there though, and I wouldn’t recommend sticking with just this one, try them all.