Grim Muerto is the latest product of Play ‘N Go, themed after the famous Dia de Muertos celebrations, occurring every year in Mexico in the beginning of November.

The day of the Dead is a festivity when Mexican natives build improvised altars and offer favourite food and drinks of their deceased members of family and friends.

Despite the fact it seems a bit morbid, this is a joyful festivity accompanied by music and celebrations, which is why Play ‘N Go included a mariachi band in the 2016 release. Apart from making playtime more enjoyable, the undead mariachi are here to help you land hefty winnings.

The reels of this five-reel, 20-payline slot are set on an authentic improvised altar built for the Dia de Muertos festivity.

You will simply love the Marco Siniestro feature, because it can be very helpful when you need to land winning combinations both in base game and during free spins.

Thanks to Marco Siniestro feature, you will get a randomly highlighted reel in every spin during base game, and once you manage to land a Wild symbol on this highlighted reel, the Wild will become an expanding Wild and cover the entire reel, making much more possibilities for winning combinations. 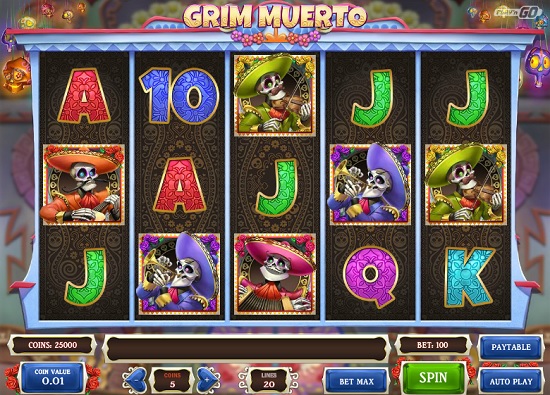 Free spins are won by landing three Book Scatters on reels 1, 3 and 5 and you will be awarded with 10 freebies. During Free Spins feature, Marco Siniestro will highlight two or more random reels and once you land a Wild on the highlighted reels expect some serious winnings, since it is possible that all five reels will be highlighted at one moment.

During freebies one of the mariachi will become an extra Wild, or an expanding Wild if landed on the highlighted reel, and we guarantee you will start dancing La Cucaracha if you manage to land a lucrative payout.

Free Spins can be retriggered at any time by landing three Candle Scatters that appear during the bonus round, so you can win 10 additional freebies, while for two Candle Scatters you will be awarded with 3 or 6 free spins.

There are not many slots that offer a Second Chance. If you land only two Book Scatters during base game, you will be given a chance to play a card game, where you need to pick one of four mariachi.

Pick the right one and you will win the missing Scatter that will trigger free spins, or you can win a cash prize, or, if you pick a wrong one, you will be left empty-handed.

Even though Play ‘N Go made it easier for gamers to land winning combinations with a two of a kind minimum, such a combination is usually smaller than the initial bet, so , even though you are winning, you are actually losing money.

Also, we find the theme of the 2016 release to be very interesting, which is why we did not like the fact that Play ‘N Go decided to use playing cards as low value symbols, since Dia de Muertos is a theme that offers many possibilities for creation of authentic symbols that could have populated the reels.

Play ‘N Go did a remarkable job concerning the overall visual appearance, thanks to the colourful graphics, very good design and an entertaining soundtrack.

We assure you that Grim Muerto is not just a pretty face, since it offers some engaging additional features and bonus games that can result with some hefty payouts, due to the highlighted reels, expanding Wilds and Extra Wilds.

The possibility of triggering endless freebies does seem appealing, so we expect that the 2016 release will attract a wide range of gamers who will have much fun at this improvised altar.