Playtech sent shockwaves to the online gaming industry when they announced in July 2016 that they would soon launch Space Invaders slot.

Their latest product is obviously based around the 1978 arcade of the same name created by Tomohiro Nishikado and developed under the license of Taito Production, the original game manufacturer.

From what we have seen so far, the five reel, ten payline game that pays both ways should be an instant hit among online gamers, and chances are it will remind them of careless childhood and all the fun they had while shooting down alien invaders in the hugely popular arcade game.

Playtech has hit the nail on the head with the game theme, as we don’t think there will be too many casino gamers that will find Space Invaders easy to resist.

The best thing here is that the famous software provider did their best to stay true to the original as much as possible, and we love how the game screen looks like the arcade cabinet that was the focal point of our childhood years.

The symbols from the original game are present, including the green laser cannon, and they have just been revamped to ensure an enhanced playing experience. 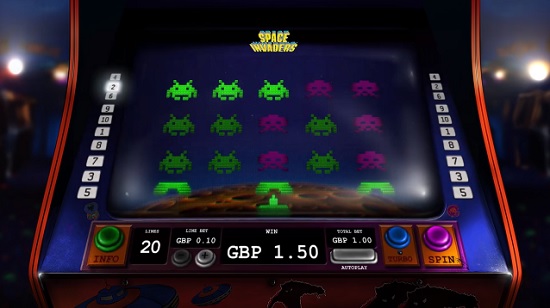 When it comes to extra features, the game leaves a bit to be desired, but while Invaders Turn Wild is unlikely to improve your account balance a great deal, UFO Wilds just might, seeing as how the feature turns up to nine symbols Wild before wins are awarded.

Win Both Ways scheme is likely to come in handy as well, ensuring frequent base line payouts, and the good news is you will not be paying extra for this perk, but rather just 10 coins per spin for 10 active paylines.

Remember how the space invaders disappeared from the screen when you shot them? With that in mind, it would have been nice to see matching game icons disappear from the reels when they form winning combinations, allowing other symbols to fall in their place, but it looks they didn’t think of that.

While the $1 minimum total bet will not be too much for some, amateur players are likely to find it too expensive, meaning that Playtech might have just shot themselves in the foot by not including coin denominations such as $0.01, $0.02 and $0.05.

At a time when modern day video slots are packed with various bonus rounds and additional perks and benefits, Playtech opted against introducing second screen bonus or Free Spins round, probably thinking the storyline is good enough to compensate for all the shortcomings, but this is another mistake they have made.

As we have already outlined, Space Invaders has several drawbacks that could hurt their chances of being established as one of the best online slots, but that does not mean you should pass up the opportunity to check out how the arcade looks in the casino environment.

The Playtech title has some strong points as well, and we have to admit we cannot wait for the game to launch so that we can continue where we left off a couple of decades ago and see whether our shooting skills are good enough to hurt those alien invaders.