If you want to know what is the connection between stellar jackpots and monkeys you have to try a new video slot from Lightning Box Games with the curious full title Stellar Jackpots and More Monkey. It takes you to distant Asian mountains but also to the outer space where the bonus video game is played. For more information on bonus features, stay tuned as they will be described in the next chapter.

The base game and the free spins feature are played at five reels and four rows and you will be offered unbelievable 1024 ways to win. In order to win a prize you have to collect three or more identical symbols including tigers, pandas, Koi fish or high playing cards symbols and place them on a payline. Immerse in the oriental theme followed by an appropriate soundtrack and you may enjoy a rewarding gaming experience.

We simply adore all the special features provided by the game as they are highly rewarding and add excitement to the gameplay. Besides Wilds depicted as Monkey King appearing on the reels 2 and 4, you may also enjoy the benefits from Scatters represented by the symbol labeled as Bonus.

Not only that three or more of a kind deliver up to 20 free spins, but you will be also offered to choose from three additional mini bonus features awarding 8 extra spins, up to 8 additional stacked Wilds on the central reel and up to 8x multipliers.

Besides, during the bonus game you get Baby Monkey Extra Wilds added to the reels 2, 3 and 4. As if this is not enough, you may trigger the bonus video game taking place somewhere in the universe where you are to destroy unidentified flying objects on 6 levels and win up to $62,500 Major Stellar Jackpot. 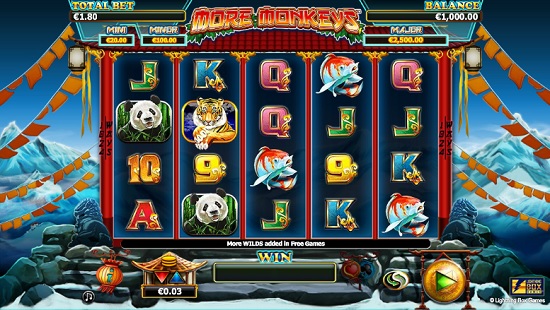 We are not impressed by the inconsistency of the game when it comes to the bonus video game as it has nothing in common with the theme of the video slot. Despite its entertaining features and a soothing soundtrack, the visuals of the game are not as elaborate as they may be. Besides, the additional features you are offered to choose from may seem a bit confusing so you should get information on them prior to launching the game.

Although you may not be impressed by the visuals or the theme of the game, you will surely enjoy a highly rewarding gaming experience it offers due to 1024 ways to win and a really fair betting range allowing all kinds of players to take their chance on it.

Follow the Kung Fu master in the battle for prosperity and win some huge payouts during the main and bonus games. You can also gamble all your winnings, but try to act responsibly as you may not be given another chance of winning such huge payouts going up to 240,000 coin maximum winning in the game.