King Kong is brought to us by NextGen Gaming. This five-reel, 25 fixed paylines slot used the famous large gorilla from the Scull Island as its main theme, and the essence of the movie is portrayed in the game, since all of the core elements are presented through symbols, presenting King Kong himself, Ann Darrow, Jack Driscoll, Boat that took them to the island, Chains used on King Kong, Planes that attacked him, on the Empire State Building, movie Camera, tickets, and creatures from the very island.

NextGen did a fine job concerning the graphics and the animation, while the sound effects are quite awesome. Even though King Kong looks pretty scary in this slot, he can provide you with plenty winnings during gameplay.

The number of special features is what we like the most in King Kong slot. The King Kong Wild symbol appears quite often during base game, but when it lands on reel 3, the King Kong Goes Ape feature is triggered, bringing lots of winning combinations, since the whole reel turns into a Wild. Also, King Kong might smash a space or two on surrounding reels, bringing extra Wilds.

King Kong Smash feature, activated by three or more Scatters, offers a mini game within this slot, since in this game you fight the airplanes and smash them down to the ground. Apart from being very fun to play, this feature can bring you up to incredible 150 free spins, with a x2 multiplier, or you can chose one of the three mystery rewards. All you need to do is smash as many planes as you can.

The Gamble Round is always good when you get tired of spinning the reels. Visuals and sound effects are quite impressive, and we love the part when King Kong breaks the reel to climb the building. 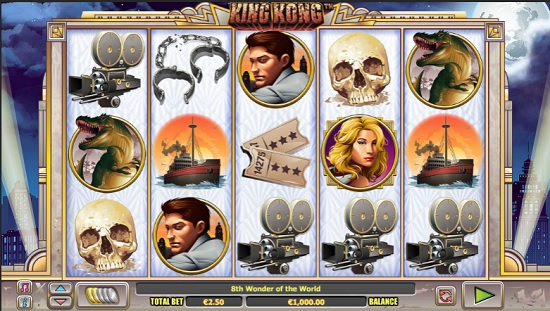 Although Scatters can be very generous, the correct combination of them is quite hard to land, since they have to go from left to right, unlike many other slots where scatters can land anywhere on the reels.

The winning combinations do come very often, but they do not always cover your wager and, even though you are winning, you are actually losing money, which can be frustrating if it continues for a longer period of time. The Gamble Round can take all of your winnings away, and it is very hard to be accurate on a longer run, since the suits and colours of the cards are difficult to predict.

We will give a thumbs up for NextGen’s King Kong, since it is filled with action and special features. The fact is you will not become incredibly rich by playing this particular slot, nor will it attract high rollers, but it can bring you a lot of fun, provided that you manage to land the proper Scatter combination and experience the King Kong Smash feature, or watch King Kong climb the skyscraper in the King Kong Goes Ape feature.