This five-reel, ten-payline slot will provide you with a gang of ferocious villains who will help you rob the train Jessie James style and run away with a pile of cash before the sheriff and his posse hunt you down. All you need to do is stop the train number 7 that carries the money, blast the safe with dynamite and take home the loot.

First of all, we have to lavish praise on the graphics and the soundtrack. The comic book environment really comes to life thanks to state-of-the art graphics and cool animations, while the soundtrack seems to come from a proper spaghetti western and heats up the situation during gameplay. Thumbs up for the man who replaced the spin button with an actual gun barrel!

Even though the 2016 release offers only a couple of special features, they are rewarding enough and carry loads of action that will chain you down to your seat. Free Spins feature is triggered by three or more Train 7 Scatters, and you can get 10, 20 or 30 freebies, depending on the number of Scatters you land.

Furthermore, before you stop the train and commence the robbery, you will spin the wheel that offers four different kinds of Wilds: the regular Wild, the Expanding Wild that covers the entire reel, the Multiplier Wild that will double your winnings, and the Spreading Wild that will turn 1 adjacent symbol into Wild as well.

During free spins, you will get an Overlay Wild as well, which can appear on reels 1-3 and will have the same function as the active Wild feature. A bunch of Wilds will appear on the reels, making many opportunities for landing rewarding payouts, which is celebrated by shooting guns up in the air.

Pick and Klick feature is triggered by landing three Safe Bonus symbols that appear on reels 1, 3 and 5, and you will win an instant cash prize from 5 times to 50 times the triggering bet, by picking one of the three Bonus symbols. 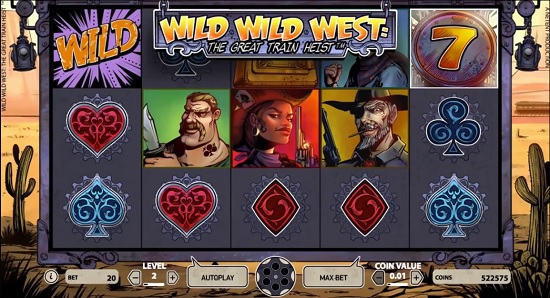 The biggest downside of this spaghetti western slot is the small number of paylines. Only ten paylines make landing winning combinations quite difficult, and the combinations you land are usually made out of low-value symbols, which can be a big turn-off.

Triggering of Pick and Click bonus is also very hard. It took us more than 100 spins to activate the feature, but we did manage to pick the Safe that offered the most, awarding us with 20 times the initial bet.

You definitely need to check out this NetEnt product because it offers some outstanding visuals and a proper western soundtrack that brings the spirit of the old Wild West back to life.

The vide betting range will please both high rollers and penny punters, while the rewarding additional features and bonus games will award you with enough loot to share around to all the members of your notorious gang, which will serve as a proper compensation for a small number of paylines that makes it difficult for gamers to land winning combinations during base game.