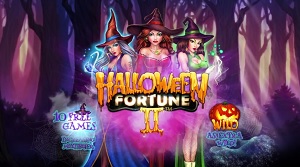 The three witches are back in action, since the sequel of the popular Halloween Fortune slot is about to see the light of day somewhere around the end of the October, just in time for the famous holiday.

Judging from the promotional video, it seems that Playtech did their best to create a video slot worthy of its predecessor, with much improvement, both visually and in gameplay.

Even though the 2016 release is intended to scare you a bit, the truth is spinners will enjoy it most of the time, especially because it offers a smashing Free Spins feature, sticky Wilds and stacked Witches symbols.

Set deep into the forest, the slot will offer five reels, three rows and 25 fixed paylines you will have to fill with matching symbols to win rewarding payouts.

First we have to say that we absolutely love the theme of the game, being very fond of Halloween. Like the famous festivity, the 2016 release tends to scare you a bit, while rewarding you with some sweets in the form of lucrative payouts.

Thumbs up for a job well done in the graphics department, since the symbols seem sharper than in the original version, while the animations incorporated really bring the game to life. The matching soundtrack completes the overall experience so that we will have a really scary slot in front of us. 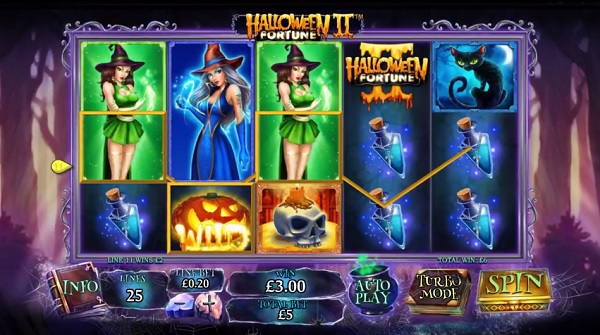 We also like the improvement of the Witches symbols, which are now two-cells high and tend to land quite often on every reel, making it easier to spinners to form winning combinations with high-value symbols, which was definitely not the case in Halloween Fortune.

The Free Spins feature is pretty neat, too. Once you manage to land three Logo Scatters, you will be rewarded with 10 freebies and some cool multipliers that tend to increase as the spins go by.

You get a 2x multiplier to begin with, and it will increase by one after every two freebies, so the last two free spins will carry a 6x multiplier, which is awesome. Another interesting addition is the sticky Pumpkin Wild that will be locked on the central position of the third reel throughout the feature, providing more opportunities for landing winning combinations.

The actual downsides of the 2016 release are yet to be determined, since all we have now is the promotional video. We do suspect, however, that Free Spins feature will not be triggered that easily, so you will have to wait for your chance to experience this cool Bonus round.

Having this in mind, we were a bit bothered by the fact that the sequel of Halloween Fortune slot does not offer additional Bonus games like Witches’ Brew Bonus, or even the Gamble round offered in the original version.

We will definitely be there to try out Halloween Fortune II slot before we go out trick-or-treating, of course if the game is released before All Hallows’ Eve. The original version is quite good, and we do not expect anything less from the sequel.

Judging from the teaser, the 2016 release is better than its predecessor, especially when talking about the overall visual impression and the volatility.

The Free Spins feature seems smashing, and we are eager to see whether Playtech decided to incorporate some additional spells or magic potions to spice things up a bit. Either way, we are certain the sequel will at least be as popular as the original slot.