Movie lovers and all true filmophiles out there surely remember the blockbuster this game is built around.

Platoon is an Oliver Stone’s movie from 1989, an award-winning blockbuster featuring several mega-stars led by none other than Charlie Sheen.

A war theme follows a platoon in their war escapades in Vietnamese jungles and will take you on a journey you will either absolutely adore or hate.

A five-reel, 20-payline slot game is a masculine title not best suited for light-hearted players. iSoft have already produced one game which deals with this movie and Platoon Wild is expected to be a more exciting sequel of the previous Platoon pokie. Is it? Read our take on it then play several rounds and make your own verdict.

We love iSoftbet’s bravery to once again go with the film that came out 30 years ago. Despite the fact it remains a popular flick worldwide, it was a risky move from the United Kingdom-based developers.

Another tip of the hat goes to iSoftbet for sticking to the original concept, without playing of experimenting with the design. A war-themed game deserves a war-like visuals which complete the overall impression in a Vietnamese jungle, perfect for all war-theme junkies. 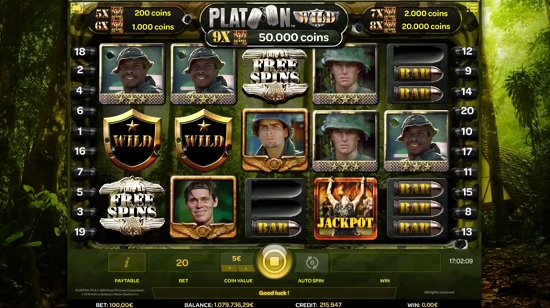 This game’s availability is a major point that speaks in favour of this game. Even if you don’t find it interesting enough, you will surely be tempted to have a spin or two on this game that is available from as little as $0.01. It will not leave a big dent in your financials as setting the bar to maximum bet will only cost you $10.

The game, however, offers some great rewards as you can hope to get as much as $25,000 as the top prize.

We have to be completely honest here, Charlie Sheen himself is not enough of an enticement to make you fall in love with this particular title.

The creators chose to stick with the original concept and even failed to provide an upgrade to their original Platoon slot which featured “Walking Wilds” with tanks firing to the side reel to increase your winning potential.

There is nothing as impressive in this game though with just regular Wild symbols, classic Free Spins and Jackpot logos which are the only thing that can be considered exciting enough as they are the ones that offer that biggest prize we talked about above.

No progressivity makes this game a straightforward and downright boring title. And we are quite disappointed with it.

No. Simple as that. If you want a military title, go with iSoftbet’s original Platoon game. This sequel has nothing that will keep you entertained.

Lack of creativity is disturbing, despite the iSoftbet’s desire to remain true to the original concept. Compared to the abundance of contemporary games that deal with the same war-like title, Platoon Wild is sadly likely to be considered a huge disappointment.