The latest release from Thunderkick will allow gamers to enter the witch shack and try to mix some rewarding potions using the recipes from the book of spells, and some of the most standard ingredients, like moth wings, hearts, eyeballs, and the inevitable frogs.

A proper combination of ingredients and multipliers could earn you up to 1,161 times the initial bet.

This five-reel slot is placed on the shelves over a pot you will use for brewing your potions and offers 23 fixed paylines.

Playable from $0.10 per spin, the Thunderkick title is visually impressive, thanks to sharp graphics, cartoon-like animations and a matching soundtrack.

We simply love the visuals in the 2016 release. Frog Grog boasts state-of-the-art graphics, some outstanding animations and a kick-ass soundtrack that fits the theme perfectly.

The fire-burping frogs are really amusing, which is why we literally couldn’t wait for them to appear on the shelves, destroying all the regular symbols with their fiery burp. 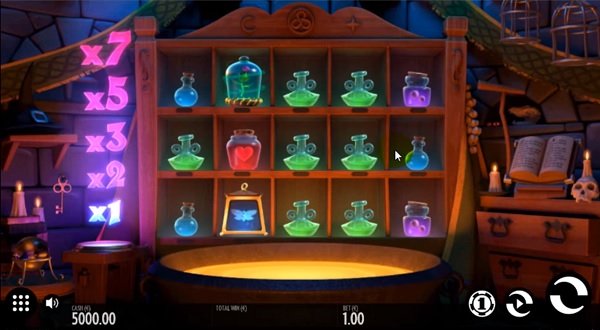 We were very impressed with the way Thunderkick turned the reels into shelves witches use to place their potion ingredients on, replacing the standard spinning grid. Gamers will definitely enjoy how the symbols fall into the pot once you trigger the Mystery Game, turning the entire room blue.

A combination of Dropping Symbols and Multipliers is a neat addition to the story. Every time you form a winning combination, you are awarded a kind of a free re-spin, where the winning symbols disappear, making room for new symbols that could form additional winning combinations.

Successive winning combinations come with increasing multipliers, and you can get up to x7 multiplier, provided you land four successive wins. The maximum payout is also amazing, since the 2016 release offers up to 1,616 times the triggering bet.

As good as it may look, we are sad to say that the Frog Grog slot lacks fun and excitement, offering a single feature gamers can benefit from, and we do not include Mystery Game in this story, because we didn’t expect much from it anyway.

The very idea of entering a spooky witch shack filled with disgusting animal body parts, skulls, flying brooms, spell books and witch hats leaves more than enough room for introducing loads of entertaining additional features, and even though sky was the limit, for some reason Thunderkick decided to leave it on Dropping Symbols and Multipliers.

Furthermore, when talking about multipliers, it is very hard to reach the really rewarding ones, we got as far as x5, and that happened only once after almost two hours of spinning the reels so that you could imagine our frustration.

The word is that Microgaming released their newest product for the upcoming Halloween, but we fear Frog Grog will not make many spinners stay home instead of going trick-or-treating, since, as we already said, the slot clearly lacks action.

Despite the fact that the company from Stockholm created a visually stunning game that offers a very high possible prize of 1,161 times the triggering bet, honestly, mere Dropping Symbols and Multipliers are simply not enough to please the appetite of action junkies, especially once they realise that reaching high multipliers is easier said than done.